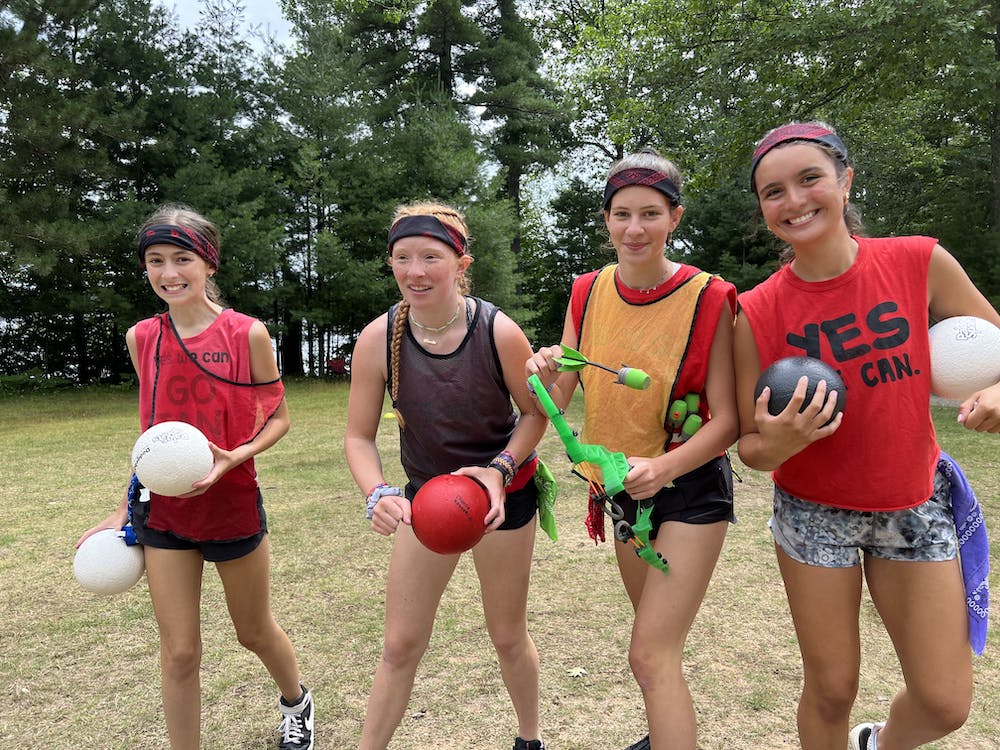 Day one of Realm Season VI: The Lost Compendium is in the books and it was epic. Don’t worry, Realm will continue tomorrow but we got a full day of amazing action in thus far. As predicted, the Round Table for both the Tans and Whites came in with excellent strategies. They have led their teams through an exciting day, and I am fairly confident that the decision makers for each team are still awake making plans for how to ensure tomorrow is a success. As for the details of today, here is my best attempt at explaining just how things went down…

After breakfast this morning, there were a couple of final meetings with various groups (House Neutrals, Knights, and others) to go over some specifics of their roles for the day. By 11am the entire camp was ready at the beach for the Cornucopia…the amazing opening event in which each Sachem and Advisor has a chance to collect bows, Twills and other supplies to help their team start the day. Tans and Whites were going crazy cheering for their leaders who were doing their very best to do their teams proud. There was a Pufferfish (neon green dodgeball) available at the Cornucopia but every single Sachem and Advisor stayed away because touching a Pufferfish without gloves and a hairnet can land someone in the hospital for hours. Aside from that, the Cornucopia was pretty standard as far as Realm Cornucopias go…there was tons of spirit and energy by all those involved and spectating.

Teams then went to their castles to get some guidance from their Round Tables. The Round Table consists of a Grand Sachem, Chief Sachem, Chancellor, Treasurer, Sheriff, Chamberlain and Grand’s Knight. This group of people works together to makes plans, and lead their team through this multi-day experience. This morning, they started each team member off with some pocket money (Twills), they let everybody know where their houses were located and they offered some strategic advice. And then we heard the Wolf Horn…the game had officially begun!

To begin the game, each house has some things they need to do in order to get their industry moving. The Fish Hatchery needed fish flakes to feed their fish, the Lumber Houses scoured the woods for pine cones, and the Poulty House began making nests for their chicks. Meanwhile, in Chip-indel, staff prepared their storefronts. Luke’s store, “Bailey’s Bows,” was selling bows. The Grossery Store, run by Lisa & Lizzy, provided campers with a place to purchase snacks and candy…yes, they were very busy today! Sophie Friedland was running the Pharmacy, where she sold different ingredients to help campers make antidotes, and she also bought fully completed antidotes. Edgar, Dan & Carlos were responsible for keeping the Chop Shop in order…they purchased all sorts of lumber from those in the lumber houses. And Josh was super busy as the Butcher- he was buying chickens, selling chicken eggs and helping campers source fish eggs. While all of this was happening, turns were alternating between Tans & Whites. During a team’s turn, they can send an attack and/or send an army to defend a house. Each of these moves can only happen if the castle has enough energy stones to send an army out. And energy stones are obtained through a game similar to steal the bacon or capture the flag. So yeah, it’s kind of confusing. But when you are in it, it all comes clear…you get it as you go!

After a lunch break, the game continued and the thrill of Realm resumed. Houses were taken down and taken back, campers became Long Bowers (congrats to Leah C, Sophie B, Cate F, Sydney J, Lily A and Olivia S) and Knights (congrats to Jayden G, Zoe G, Ava Z, Georgia Sc, Hayden R and Taylor G), and the sachems from each team began digging in the sand for what they hoped would lead them to either a key or the Lost Compendium itself. Additionally, something very exciting began- multiple houses became manors and some even went public! A house becomes a manor when they have at least 1,000 Twills, and they can decide whether or not they want to go public. If they do decide to go public, Tans and Whites can invest in their manor. The investing began with Jacklin R and Julia E…they met with the House Leader, Arielle K, of the manor. Arielle made the decision, with advice from some more experienced Realm participants, to officially go public. It was an exciting moment for all involved and I loved watching it happen!

There was also some Realm action after dinner…I mean it when I say this day was non-stop! I was over by the Tan Apothecary House on the South End of camp (formerly the White Apothecary house), and I witnessed a huge attack. There was a Tan Army defending the house and a White Army attacking. The Braves in the house were awesome in trying to help defend their house, but in the end, Halle S hit a target with her long-bowing skills!

The evening concluded back where we began this morning on the volleyball court. All Sachems and Advisors from both teams were digging tirelessly for what we learned was a secret key. It was fairly dark but teams were cheering their hearts out as they watched their teammates digging with flashlights shining everywhere. Finally, after a significant amount of intense work, Avery K discovered a box, which contained a key. She was immediately hugged/tackled by co-sachem, Lauren G. The White Team was going nuts! We still are not totally sure what the key will unlock but the suspense is real and we cannot wait to figure it all out tomorrow…when Realm Season VI: The Lost Compendium continues!

At this point, everybody is zonked, and hitting the hay. We all know we are in for some real excitement tomorrow. Rumor has it, there is almost a guarantee of a castle attack! Everybody is officially familiar with their roles in this crazy game and we are all eager to see what will unfold tomorrow.

Okay, time for bed for me as well…I hope you enjoyed tonight’s entry, and that you at least semi-know what is happening throughout #TheRanch2022 during the sixth season of Realm. More to come tomorrow- thanks for reading!