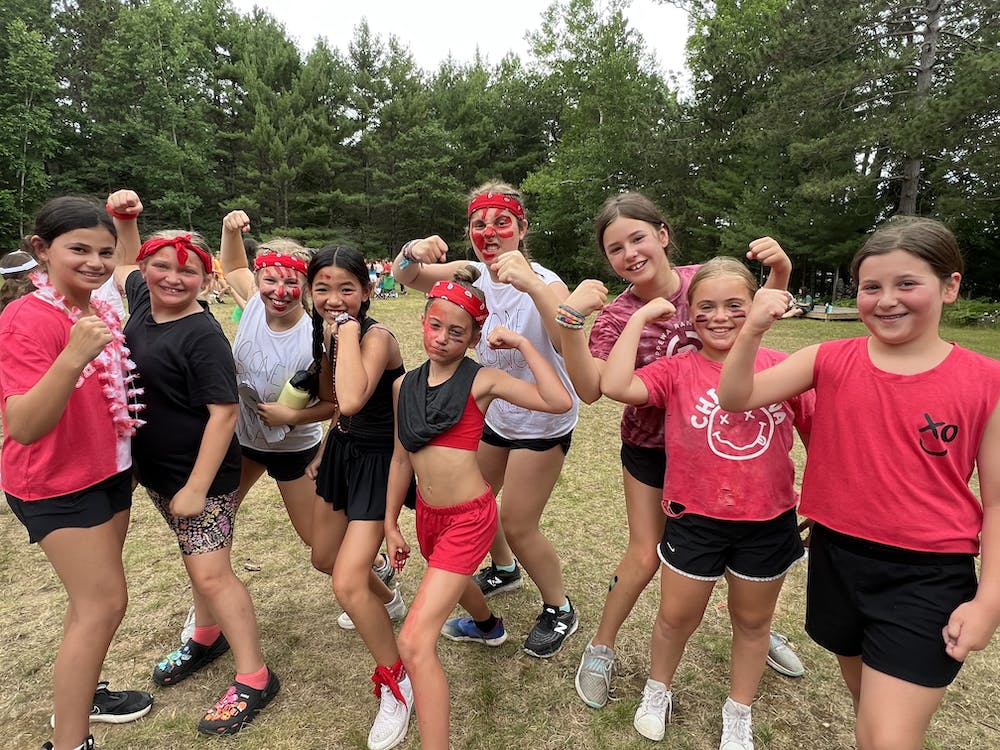 Hi everyone! My name is Julia N, I’m in the cabin of Lakeview, and I’m writing today’s Sari Diaries! Today was U.N. Day, which is one of my favorite days of the entire summer. The theme was countries with female monarchs. I had the opportunity to be the Wrangler Village captain of Bhutan. My Colt Village co-captain was Mila S, and our advisor was Dylan Grossmann. The other countries were Luxembourg, Tonga, and Grenada.

The captains and advisors started off the day by appearing on Cliff’s morning wake-up call. We sang a very off-key rendition of the United Nations March to wake the camp. Next, everyone got dressed in their country’s colors for breakfast. It was awesome to see the spirit campers had! For example, Annie M dressed in an Elsa costume for Luxembourg, Skylar G painted her entire arm green for Grenada, and Maddie Z wore a red and black striped leotard complete with a tutu for Tonga.

After breakfast, there was a brief cabin cleanup. We were all called to the center fire circle for the torch lighting ceremony. I had to run to arts and crafts to grab our team flag, and when I returned I found Mila, Megan W, Justine S, as well as others leading the entire team in cheers. I was so impressed with the confidence these young campers had standing in front of everyone cheering. Cliff gave a long yet entertaining speech about his travels the night before. He explained how he went to each of the four countries represented all while we were asleep in our cabins. How he managed to do all that travel in one night, I will never know.

After Cliff’s speech, it was time for the torch lighting ceremony. The captains all lined up along the path. Beginning with the younger captains, a torch was passed along via a “light jog,” as Cliff put it. I had the honor of being the last captain to receive the torch. This meant that I was the one to light the center fire circle and officially commence United Nations Day. It was exhilarating. I, as well as everyone else, was full of excitement and anticipation for what the day had to offer.

The entire camp headed to the North Field for leg wrestling. I love leg wrestling. Basically, you lay on your back, lock legs with your opponent, and attempt to flip them. It sounds dangerous, but I promise, it’s not. In the Colt Village competition, Tonga won. In the Wrangler Village competition, it seemed that Tonga would win again, but Sophie B on Luxembourg took on dozens of people and could not be beaten. She won leg wrestling for her team. The entire camp was rooting for her, despite her being our opponent. U.N. Day is about good sportsmanship just as much as it is about winning. Similarly, in the staff competition, Samantha Graines on Bhutan outlasted everyone despite the odds being against her. After leg wrestling wrapped up, it was time for the first series.

One of the aspects of U.N. Day I love most is how much you bond with your team. Age barriers break down and we all are able to enjoy each other. I had so much fun getting to know people from other age groups and cabins. For the first series, I played softball. I was not good. I batted twice, got out both times, and did not touch the ball once in the outfield. Yet, I had the time of my life. The spirit, energy, and joy my entire team brought with them onto the field made every second of the game worth it. We were able to be goofy and still be competitive, which is how Bhutan got second place in softball.

Then it was lunch. We sat by team. I sat with people who I had never sat with before like Bryna C, Jacklin R, and Lana M. I also got to sing the Trailriders cabin song, which I hadn’t done since last summer. The standings were announced. Bhutan was in third place. Grenada was in fourth, Luxembourg in second, Tonga in first. Each team had the opportunity to cheer before we were given a brief rest period.

For the second series, I participated in sailing. For this activity, we had to rig the boat, sail around a buoy, and de-rig. My partner was Julia P. It was a very windy day, which made for a very entertaining competition. I watched as Dylan G and Georgia S almost capsized, and as Julia W and Sophie B got stuck behind the Hobie. Bhutan ended up coming in second place for sailing. I then cheered on the soccer game alongside Dylan and Mila. We got second in that, too.

I played flag football for the third series. I was absolutely blown away by the athleticism of some Chippies. Emery S scored multiple touchdowns. Leah C sprinted across the field with the ball. Julia H caught more than one seemingly impossible throw. At this point in the day, we were all hot and exhausted. Still, we remained upbeat and energized throughout the entire game. As Cliff would say, it was slay. I had so much fun. Bhutan once again got second place.

Finally, we entered the fourth series: swimming. I swam in the six person relay. The lake felt incredible after the heat and sun I had endured all day. I also blobbed Mila for the blob competition. We were both really nervous. We held hands as we jumped into the water and swam to the blob. Once Mila reached the end and I was ready to jump, we screamed a cheer, “lettuce, tomato, cucumber, crouton, BHUTAN! BHUTAN! BHUTAN!” Mila flew. We climbed out and she had the biggest smile across her face. We were both so happy. The other pairs also had great blobs. Sophie B blobbed Noa C. Caroline S blobbed Reece M. Ro-Buishia blobbed Bob.

We all took showers, ate a delicious barbeque, and watched the staff play flag football. Eventually, the time came to announce the winning team. The entire camp gathered in the theater. Cliff called all of the captains on stage to thank us for our hard work. This moment was surreal for me. I had sat in that audience for six summers and watched the captains up there on Sophie’s Center Stage in awe. I looked up to previous captains, and the fact that I could be that person to a little camper sitting in the audience is unbelievable and amazing. I am so honored that I was given this role and I could not be more grateful for the experience.

Now the moment you all have been waiting for: it’s time to announce who won U.N. Day. In fourth place, Bhutan. Even though I got last, I still had the best day ever. The wonderful thing about U.N. Day is that you don’t need to win to have fun. Like I said at the beginning, I love U.N. Day, and I have never won. The activities, the people, and the day in general are what’s fun- winning is just a small bonus. Grenada got third place. Tonga got second. Luxembourg won!

The members of Luxembourg as well as the captains and advisors went to Cathy’s. It was many campers’ first time at Cathy’s. I watched as Logan R and Laken E excitedly debated on which flavor to get having never been before. I got the classic Pirate’s Booty. We came back to camp, and now I am sitting in the office, writing today’s Sari Diaries!

U.N. Day is magical. The positivity, sportsmanship, and happiness radiate through the Chippewa air. For me, today was my favorite day of the summer thus far. But now I am exhausted! I have to get going to bed so I can refresh and be ready for another great day at Chippewa!