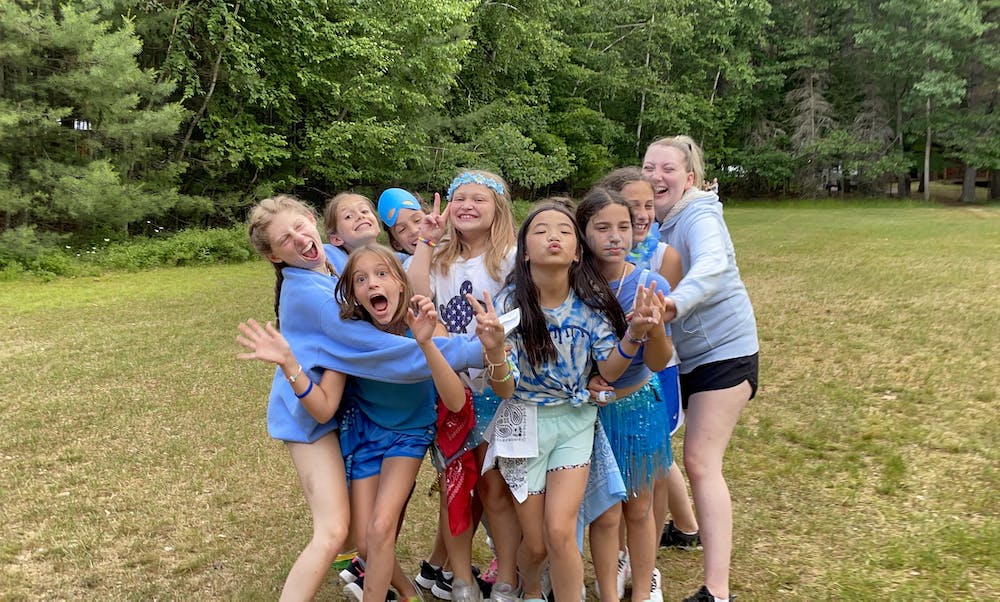 Happy Monday! Today was an amazing day at #TheRanch2021 and I am excited to be sitting at my desk reporting to all of you. As you read the below summary, I hope you will read it knowing that today truly felt like camp- the energy, the spirit, each & every element was just SO CHIPPEWA! So here it goes…

This morning began with a birthday wake-up for Sophie G. Another Lakeview camper with a birthday. This age group seriously has the most birthdays in the history of Chippewa…at least I think :). That being said, it was an exciting wake-up ending with a Seven Wonders Quiz. We then had waffles for breakfast and an excellent cabin clean-up. A big shout-out to A-Frame for getting 100 on cabin clean-up!!

And then activities began! It was a gorgeous day and campers were excited to get on horses, hit tennis balls, climb the wall and waterski. They got to do all of that and more- five hour-long activity periods that were full of fun! Some highlights included Liv K getting up on skis for ten seconds, Ellie L lifting a ski, Mackenzie M getting around the lake on two skis and Lilah K crossing the wakes on two skis. At lunch announcements, Sydney Feldman (Fishing Director) gave us an update on how many fish campers have caught thus far. Marli P, Mia G and Ava V have each caught four, which is impressive. But leading up the way is Sophia G with five fish caught!! Down at sailing, Alex K and Hannah R made the day of two Rafter campers by taking them sailing and teaching them the ropes of the sailboat.

After fifth period, when Gophers went to get the mail, the campers found out that tonight was PIRATE NIGHT! Everybody was very excited to get decked in their assigned colors and begin strategizing for this program that so many love. The out of cabin staff, OOCS as we call them, dressed as pirates, and they looked good! When the night started, the pirates chased the cabins out of the North Field and they began looking for flags and following the clues of the treasure hunt to find the buried treasure. Counselors protected their campers from the pirates and they ran around camp joyfully. And I don’t use that word lightly- these campers were screaming, laughing and just enjoying! The sounds of tonight’s program were just so camp…it was a beautiful thing! Trailriders ended up finding the buried treasure (hidden near the tennis courts). To end the game, everyone headed to the Center Fire Circle to find out who won. And sure enough between the buried treasure and the flags they collected, the campers of TR were the big winners tonight! Following the Center Fire Circle, in keeping up with a long-standing tradition, the pirates then side dove into the lake as all of the campers chanted,“Pirates in the lake!”

That was the day here at CRC and it rocked! After a long and awesome day, campers are definitely ready to hit the hay- a good night’s sleep has certainly been earned by this community! Thanks for reading tonight’s diaries- have a good evening and talk to y’all soon!