Tonight’s TSD has a bit of a different format as I have a guest writer who has chosen to share some details about our day at #TheRanch2019. So the below is a combination of both Emma H’s reflections and mine. As you will soon find out, Emma is a very articulate writer and her description of the day is incredible…so here it goes: 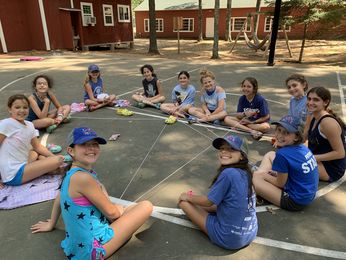 Sari Today was our final cabin day at #TheRanch2019 and it was amazing. We are at the point in the summer where every single person living on CRC soil is attempting to take advantage of every moment we have here. The time that we have with each other, and on Dam Lake is valuable and we are all officially aware. While this is a sad fact, it also has some positive side effects such as the entire camp community finding the fun in everything that is happening. And today was just that- a day full of fun, excitement and positive energy. 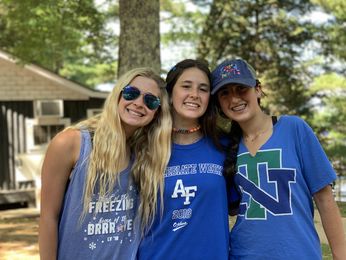 Emma Hi! I am Emma H- this is my 4th summer at camp and, I am so ecstatic to write the Sari Diaries tonight! The morning started late for most Chippies. There was Sunday breakfast and I ordered a dairy free chocolate chip pancake. I quickly devoured it and went back to Bowed Legs for cabin bonding, which was led by my counselors Lauren G, Emma S and, Skylar S. The 13 of us went to the North Field and played Twister with paint. We also did a mock version of the Circle Game that is played on the 4th of July. Following this awesome activity we took a swim in the cool lake to rinse off all the mixed paint. We dried off and played M.L.T. (most likely to). We wrote questions on slips of paper and pulled other people’s slips out of a hat. By the end we were all hysterically laughing from nominating each other for the most ridiculous and hilarious things.

Sari After a wonderful Sunday Morning Breakfast, we had some fabulous cabin activities. In addition to the Bowed Legs activities that Emma described, Timber Walk made awards for each other before enjoying a water fight and other cabins all over camp were spending good, quality time together! During this time, I had the opportunity to go drive the wave runner while Trailriders went sailing. They were on four different boats and had a blast just hanging with each other. I personally loved getting to drift between boats as a participant in their cabin day! 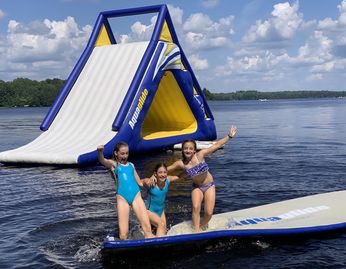 Emma Soon enough it was time for lunch. My cabin was called to the lodge and we indulged in mac n’ cheese and corn dogs (I had an alternative meal). Erick, the salad bar manager, also decided on exceptional choices for the salad bar for lunch! After lunch, my friends and I hung out on The Daisy together because with only a few days remaining of camp, we are trying to maximize our time together. The sun was shining, and we had a lovely time.

Sari This afternoon, we followed up the Friday night Love Never Ends campfire with some activities to honor Alexa. It all began with the camp gathering at the waterfront to talk about Alexa’s legacy and then campers spent time with their cabins and age groups making cards, swimming in the lake, jumping on the tramps, eating s’moreos and making friendship webs that turned into bracelets. It was a wonderful couple of hours in which friends got to strengthen their bonds. It was also a time that we all were reminded of the importance of our love for each other and this place. 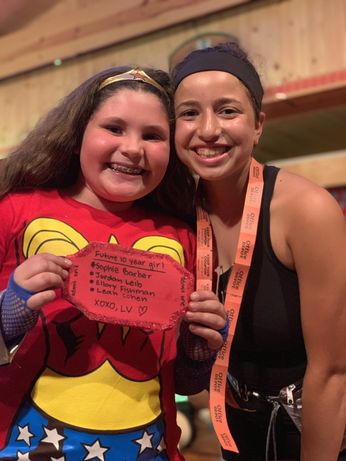 Emma Talia S, Sophie S, Hope F, and Sadie G gave a really nice speech for the remembrance of their, cousin, and friend that is missed by all. In her honor, we celebrated never ending love in the afternoon. We bonded as a cabin and as an age group by swimming, jumping on the trampolines, making s’moreos, and making a special cabin bracelet.

Sari And then tonight was Chippy Awards. This is an annual awards ceremony put on by Lakeview, our oldest cabin. They have been working hard planning the awards and making decorations for the theater. The theme was Chippies Last Ride- it was amusement park themed and it was very cool. Campers and staff received awards…everything from Future President to Silliest Sailor, and from Chippewa Dictionary to Future Egg Head. One of the best parts of the night was watching friends and cabinmates cheering for others who had received awards. The genuine joy demonstrated for others was a beautiful sight. Overall, it was an outstanding night- Lakeview really outdid themselves both in the effort they put in and the positive impact that they had on the entire camp community through that effort. 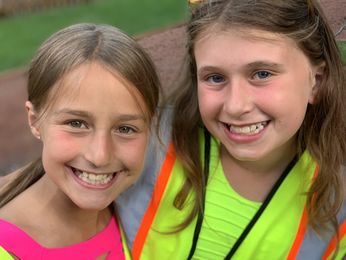 Emma The day closed with Lakeview’s “Last Ride” and I got a Chippewa Award from Chloe W. for “Sleeping Beauty!”

Sari Alright, I think that’s all for tonight…it was definitely a good one around here. I huge thank you to Emma H for her contributions to this evening’s post. She has been writing a daily recap for her counselors each night (called The Emma Daily), and I am thrilled that she was willing share her writing with all of you! Thanks for reading- enjoy your night!