Here we go- the description of another out of this world day at #TheRanch2019. I mean seriously, I don’t know how each day beats the last, but people do say that camp is a magical place :). And today lived up to that…both what happened and how things happened played into all that was so wonderful about our day. So here it goes- my attempt at doing 7/31/19 at CRC justice… 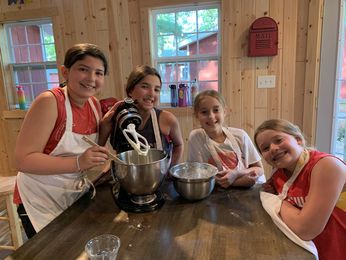 It all began a half hour later than normal…an 8:30am wake-up was just what this camp needed. I know that half an hour doesn’t sound like a lot of time, but around here, that can make all the difference! So we began the day with a birthday wake-up for Maddie W followed by a Seven Wonders Quiz. After a delicious breakfast and an excellent cabin clean-up (both Copper Stripes and Bowed Legs earned 100s!), we enjoyed morning activities. Following an exciting lunch where we cheered for our Kahuna Day teams, we went straight into our afternoon activities. And then we had a delicious BBQ dinner, the Timberlane boys came over to watch the musical (Alice in Wonderland) and then we did some socializing in the North Field. At this point, the cast party is happening, Maddie’s birthday party is in full swing and the rest of camp is getting ready for bed. 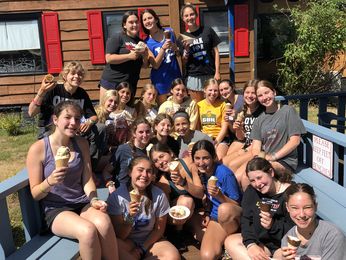 So that’s the outline of the happenings, but the beauty of our day lies in the details of it…when you take a closer look, you really get the feeling for how special it was. I had the opportunity to witness campers cheering each other on at the high ropes course, others encouraging their friends who were nervous to go waterskiing, staff members who were generous with their time in taking my sister and I on the ski boat for her to slalom again today, and some who put themselves out there acting on stage for the first time. It was all spectacular and I am very happy to have been a part of it. 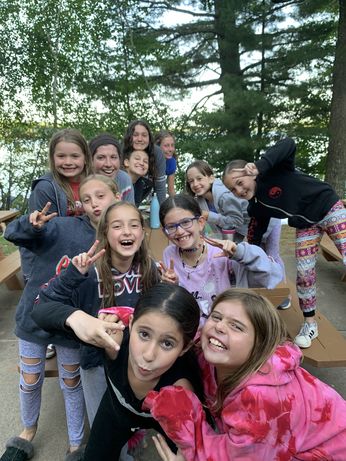 A major highlight for me was the BBQ. It began with Soph-Aloaf, Rachel and I sitting at a table alone. Soon though, we were joined by most of the cabin of Blackfoot along with Sophie Friedland, Leah Berns and Ally C. And let me tell you, we had some fun. The Blackfoot campers had us laughing…or is it giggling? We couldn’t decide what the difference was until Alexis G reminded us that giggle starts with a G while laugh starts with an L- hehe. And then Leah described to all of us how we could sound like a rooster…it’s hard to explain, but most people around the table gave it a try and at the very least, it was some good dinner entertainment. We ended the meal standing on the benches singing Twinkle Twinkle Little Star while following a dance led by Leah and Sophie…well, dance might be a loose term but there were some moves that went along with the song. 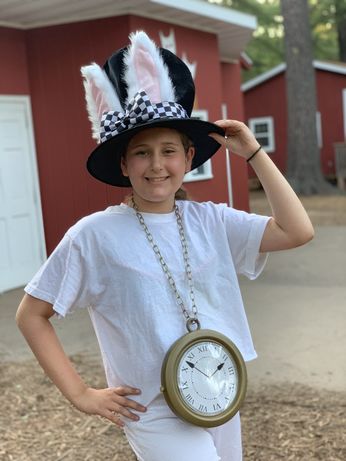 This evening, I also had a group of seven campers in my office who were wanting to discuss a prior situation with me from the Menominee social. There was a bit of a dispute regarding a baggo challenge while we were there. After much thought, a fair amount of reviewing the evidence, and giving them a chance to plead their case, it was decided that they had in-fact earned themselves Cathy’s! The cheering coming from my office was insane…all over a scoop of ice cream…albeit Cathy’s ice cream…it was great! A big congratulations to Savannah M, Sophie Z, Sydney T, Jacklin R, Jules L, Maya F, Ava F and Kayla Z on both winning the baggo challenge and also for being so articulate and convincing in describing their side of story. 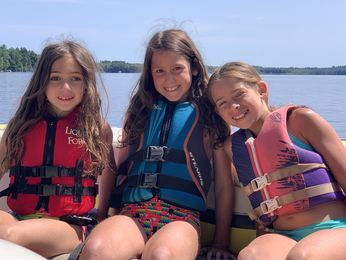 And then, the moment that so many have been working so hard for arrived. The 2019 CRC musical- Alice In Wonderland- was performed…not once, but twice for an audience of Chippies and Timberlane Boys. It was an excellent show demonstrating both incredible musical talent as well as a true comedic side to some of our campers up on stage. A shout-out to Shoshana M who was one of the Alices…she memorized soooo many lines and sang beautifully. I would also like to take this opportunity to thank and congratulate all members of Lakeview who were a part of tonight’s performance. Almost the entire cabin decided to participate and they made the show. They were funny, mostly well prepared and helped make it an enjoyable experience for all! 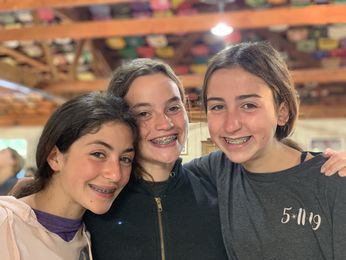 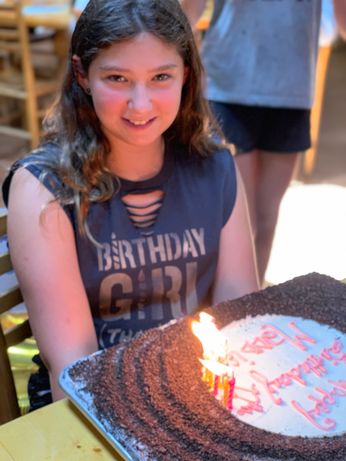 In the office tonight, we have had a number of visitors. First Julia W and Lizzy LoGrande stopped by to say, “hello.” We didn’t let them leave that easily though…we put them to work trying to fix the megaphone for Kahuna Day tomorrow. They sat in my office working together diligently, committed to getting the megaphone in working order. While it was a small moment, it was also an incredibly sweet moment between a camper and her counselor. One of those moments that I actually think both Juj and Lizzy might remember for a long time. Our next visitors were Eden S and Sydnie K. They had a question about Chippy Awards, which they are already excitedly preparing for. Their visit also lasted longer than I think they intended but it was fun to chat with them about their experience in the play, the fact that the end of camp is nearing, and about their future in podcast hosting. Again, nothing Earth-shattering but just a nice moment hanging out in the office serving as a reminder that the people at this place are awesome.

Okay, that’s all I got for now…obviously though, this day on Dam Lake rocked! Thank you for reading- check back tomorrow for Soph-Aloaf’s Thursday post! Goodnight Chippies…