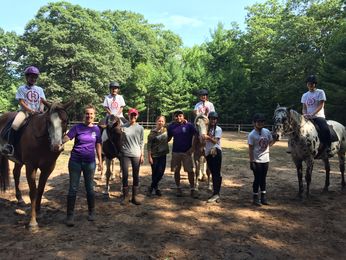 If you read last night’s post, you probably think that there is no possible way that I have more to write tonight…I know the Realm edition of TSD was long. But believe it or not, we packed even more action into our day today. While Sundays are typically a little bit more relaxed at #TheRanch2017, we basically had three major Chippewa programs all on this one Sunday. Chippewa Rodeo was followed by Kahuna Day 2.0 which was followed by Chippy Awards. I know it sounds crazy but we actually made it all work. So here it goes…let me tell you about our day around here! 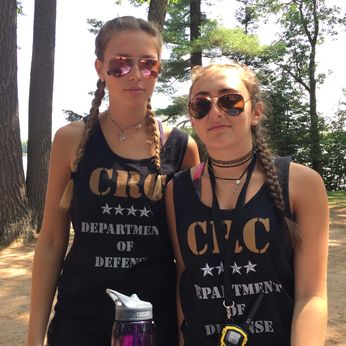 Chippewa Rodeo is one of the longest standing traditions here at CRC. At the end of each summer, our most advanced riders (Senior Saddle Club) puts on a riding show for the entire camp. This morning, Grace F, Maddie K, Carly M, Caroline H, Landyn S and Molly L put on an amazing show that included multiple jumps and a showing of their incredible riding skills. Horseback riding is one of those activities at Chippewa that is highly respected. While not every camper chooses to ride, they all seem to have an appreciation for it…there is an understanding that it is a part of Chippewa’s history and that it takes a big commitment to become one of our advanced riders. Everybody who was watching this morning proved this to be true- they were excited for their friends who were participating and impressed with the skills of everyone who performed! 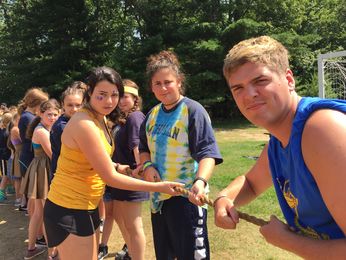 Upon the conclusion of the riding show, Kahuna Day part two commenced! The spirit and enthusiasm for the day picked up right where we left off on Thursday. In contrast to Thursday though, we had sunshine and warmth all day long! Campers enjoyed kickball, a scavenger hunt, an obstacle course, soccer, flag football, bucket brigade and much, much more. I had the opportunity to ref flag football with Soph-Aloaf. The talent is good this year on the flag football field- per usual, Sarah & Anna S were amazing but others who came up big include Sarah D, Faye B and Alex S. We ended the day with water competitions (flutter kick, sweatshirt relay, staff relay and a slide relay), and then the luau. To conclude the Kahuna Day portion of our day, Ari and Eliza announced the point totals and winners of the day. The Marines came out on top…they are excited to head to Cathy’s tomorrow during rest hour! 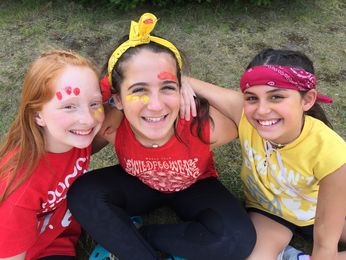 One more note on Kahuna Day…the captains and advisers were amazing. They kept the enthusiasm for Kahuna Day strong basically from Thursday through tonight and the entire camp was buzzing with excitement throughout the day. Their leadership really shined through and we are incredibly proud of them. Additionally, Ari and Eliza were fantastic. Their planning paid off, and the day ran without a hitch…they had thought of everything and really covered every single detail. So a big thank-you to them! 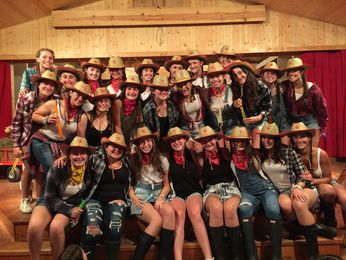 And then there was tonight…Chippy Awards 2017. It truly does not feel like it is time to write about this event…where has our time gone?! I honestly don’t know the answer to that question but I do know that Lakeview did an outstanding job at creating a fabulous night full of memories for the campers! Their theme was 8258 County RodeO, and they did it up! The theater was turned into a country-themed wonderland and it looked perfect. Throughout the evening, they gave awards to different campers and staff for talents that they have. Nicole L received the Katniss Everdeen award-
her first Chippy Award ever. I also learned that Lila I is an avid reader at camp…she won the award for reading the most! Additionally, the A-Frame counselors won cutest cos and Wagon Ridge won Rowdiest Cabin. It was fun to watch the Lakeview campers excitedly present the awards and so cool to see the younger campers go on stage to receive the awards, cheer for their friends and look on at the Lakeview girls in awe and admiration. Lakeview- you once again should be so proud of you…we appreciate your hard work!

I think that’s all for now. I could legit go on and on and on and on with details about the our day. That said, it’s time for bed AND I need to leave you wanting more :). So I am signing off for now but promise to be back tomorrow. My one warning statement I would like to give is that it could get emotional from here on out. As Thursday approaches, the sadness is sure to set in…I will try to focus on all of the positives that will inevitably exist, but I just know that there could be an overarching feeling of melancholy as the closing week ensues. Okay, thanks for reading- goodnight!