Dear Chippies, Parents, Family and Friends,
Below is a diary entry that has been written from at #TheRanch2017 camper’s perspective all about your day of Tan & White Realm- Rise of the Dragon. Enjoy!
Happy Camping and Love,
Sari

Today was the coolest day ever! I have been excited for Realm all summer because I loved it last year, but this year it was even better! After breakfast, we all went to the theater for the selections. Some of the Braves were put in houses and others were selected as Energy Stone Scavengers. The Blackfoot campers were responsible for making the Dragon Powder which is the stuff that our team needed in order to use the dragons that we found. I know it sounds kind of confusing but I will try to explain it all because as the day got going, it all made sense to me! During selections, we found out which Hunters were going to be spies and which Hunters were going to protect the dragons that were found. Finally, the Chiefs and Warriors were mostly split up into different colored armies. They got to attack houses when it was their turn and defend when it was the other team’s turn. Some of the Chiefs had special jobs that they were assigned…like Treasurer of the team, a Knight who was assigned to protect the Grand Sachem, a Longbower who was really good at shooting the targets on the houses, and the Chancellor who checked on each house and camper for their team to make sure everything was running smoothly. 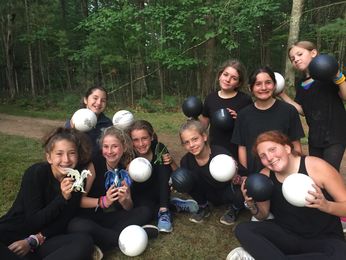 I was so excited because I was selected to be in the Lumberjack House. For a lot of the day, I was collecting wood that the Chipendel Engineer bought from me to build things like the catapult. I had soooo many Twills by the end of the day- it was insane! Okay, now I realize this might sound a little bit confusing but here are a few things you should know:

1. Each house has a different industry- ours was wood but others were poultry, pharmaceutical (they create magic potions that teams need if they get in trouble) and fish. Each house has a specific pattern they need to follow in order to sell their products and make money for their teams. 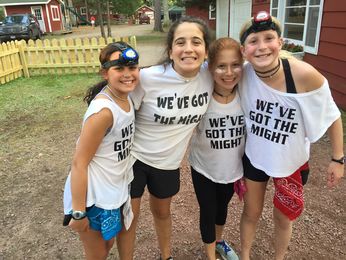 2. Chipendel is a neutral area in the center of camp. They sell/buy candy, snacks, baked goods, chickens, fish, bows and arrows (nerf) and a couple other goods that teams need. The jail and hospital are also located in Chipendel. It is a fun place to hang out during the day and to get a rest from the grind of production in the houses.

3. Yes there is a catapult in this game :). The Castles can buy it if they are getting close to being able to attack the other castle (I will explain soon). 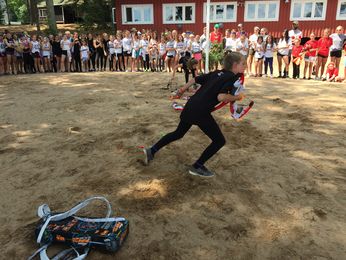 4. Twills are the currency of Realm…and at the end, each Twill is worth a point.

After selections but before the game began, we had the Cornucopia. We all gathered on the volleyball court where there were almost a hundred different items at the center that would help our teams. The Sachems from both teams lined up on either side of the court. Each Sachem had fifteen seconds to grab as many things from the center as she could. Some seemed to be going for Energy Stones (that’s what helps fuel the armies) and others went for bows & arrows. There were even some clues that were in the Cornucopia. It was a lot of fun to watch the process and I think we got some pretty good stuff! 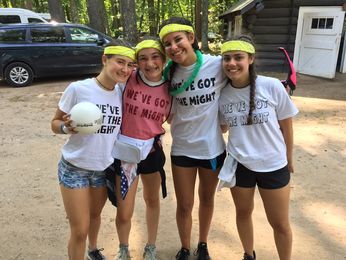 At one point in the afternoon, the White Chief’s Yellow Army came to our house to attack. Don’t worry though, we had our Tan Army there to protect us, and while the Whites did end up hitting one of our targets, they didn’t take our house down completely (they would have needed to hit both targets to do that). It was thrilling to watch and really made me excited to one day be a Chief who gets to be a part of attacking and protecting houses!

Throughout the day, I also saw our spies working hard. Summer W, who is our Hunter Sachem, got to walk around with a walkie talkie to communicate with our Castle (Dylan S, Emily C and other Chiefs helping them create a plan). She relayed to them what was going on around camp- both on our side and the other side. 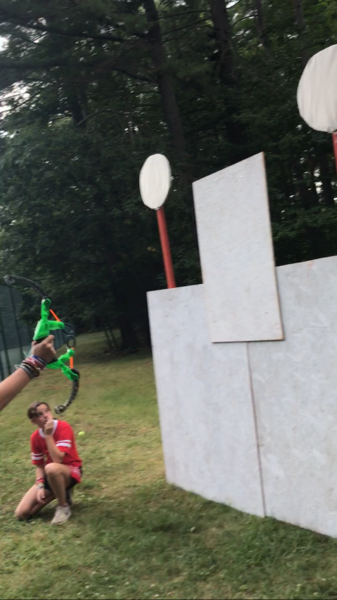 The other really cool thing that happened was that our team found four of the six dragons! We got the yellow, blue, purple and red one. In order to attack the castle, one of the things the team needs is to have captured at least four of them, so we were all cheering once the Hunters found the fourth. Even once the dragons are found though, that doesn’t mean they are safe. We had a group of Hunters who had to protect our dragons deep in the woods in our Dragon Lair. They guarded them with dodge balls that they would use to hit the other team who might be trying to steal them.

While all of this was going on, some of the Chiefs at the castle were working to become Knights. Once you are a Knight, you are worth more points for your team and you can defend the Castle using red balls which are worth extra points if you hit someone (only during an attack). In order to become a Knight, you have to go through a pretty rigorous training process. I saw Halle G and Talia S working really hard with Turner- the Trainer. They were running, doing jumping jacks and lots of push-ups. Once the exercise part was over, they had to learn how to use a catapult because only the Knights are allowed to use it when attacking the Castle. I was so proud of the girls on our team who became Knights…it really did look like a challenge!

After dinner, the game was still going strong. It seemed like we (the Tans) were winning because we had possession of five out of the six White Team houses along with four dragons. Once we got the sixth house, as long as our four dragons were protected, we would be able to attack the castle. And that’s just what happened! As it started getting dark, our House Neutral, Dori, told us that we could go to the North Field to help our Castle with plans and preparations. 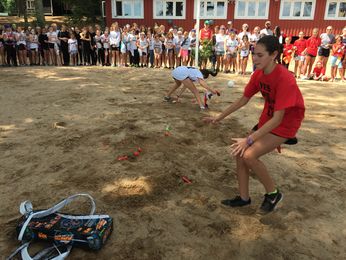 As Emily was showing our whole team the map of what was going on, she was excitedly congratulating us on an awesome day of strategy and hard work. The game wasn’t over though…we were waiting for the Tan and White Neutral, Smoss, to let us know if our Knights were successful with their catapult attack. If so, we would all get to to to the South end of camp, where the White Team Castle was, to watch the attack on their Castle. And sure enough, Smoss let us know that we should all head over there…we screamed with excitement and ran as fast as we could to behind Blackfoot and Silverspurs.

The scene was so cool out there…it was pretty dark out but there were lights shining on the Castle so we could all see what was going on. The Sachems along with all of the Warriors and Chiefs from both teams got to participate in the attacking and defending of the Castle. All of the Braves and Hunters sat and watched in amazement…it was explained to us that the Longbowers from the Tan Team had to hit the two targets on the Castle before getting hit by a dodgeball in order to take down the White Castle. The Whites lined up to protect their Castle while all of the Tans circled around their Longbowers to protect them while they shot for the targets. It was crazy but the Whites were able to stop the Tans from taking down their Castle! I really thought that our plan was going to work but we weren’t able to hit their targets…it was a difficult task! It’s okay though, it was an incredible battle to watch! 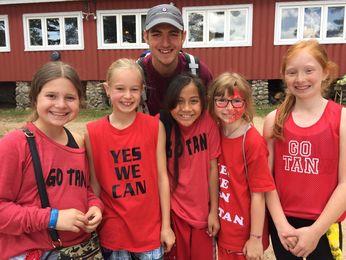 Nobody was really sure what was going to happen next. We didn’t take down the Castle so that meant that the game might still go on. The only thing was, it was getting close to everyone’s bedtime. I had heard that Realm could go through the night but I wasn’t sure if that was true. The whole Tan Team went back to our Castle and the Sachems were called to Chipendel for a meeting. When they returned from their meeting with the White Team Sachems, they let us know that they had agreed upon ending the game. It was so much fun but both teams decided that the Neutrals should base the winner of Realm on the points and Twills earned to that point. Even though I had sooooo much fun, I was a little bit relieved to know that I was going to be able to sleep in my bed. The Neutrals got on the loud speaker to let us know to clean-up our areas, head back to our cabins, do tick checks, shower and get ready for bed…they were going to announce the winners after a lot of counting!

About an hour later, Smoss, Katie and Sophie came back on the announcements and everyone in my cabin got silent. They let us know that Bella A and Rebecca R were the top point finishers of the day…I was so proud of Bella because she is on my team and I saw her working so hard to practice hitting different targets throughout the day. And then the poem came…and then the poem ended with…“The winners are the Tans!” Yayyyyy! 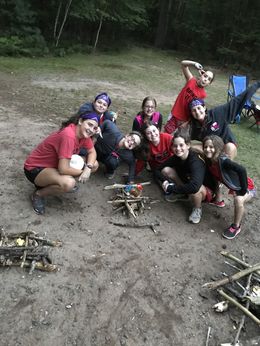 And now I am laying in bed writing this entry…I am so happy and proud of my team. Emily and Dylan really prepared us so well. I know they had a ton of late-night meetings learning all of the rules so that they could help our team strategize. I had a feeling we were going to win this morning because before the game began, each team met at their Castle for a pep talk. It really seemed like we had a good plan…the whole team was on the same page and we were super-excited to put the plan into action. And it worked! I know that the Whites worked really hard too and I am sure the point/Twill totals were really close. From talking to the girls in my cabin, it seems like both teams had so much fun and loved every part of this day.

I am, of course, looking forward to Realm 2018…I can’t wait to see what new elements are brought. Everyone who trained to be a Knight gets to start off as one next summer…I hope that I become a Knight sometime soon…it would be so fun!

I think that’s the full explanation…it was an amazing day at CRC. Realm is such a cool tradition and I am really glad that I got to be here for the beginning stages of it. I now really understand every single part of the game and will probably be thinking about it throughout the year as I sit in school wishing I were back at camp.