Finn- As Dog as a Human Could Be 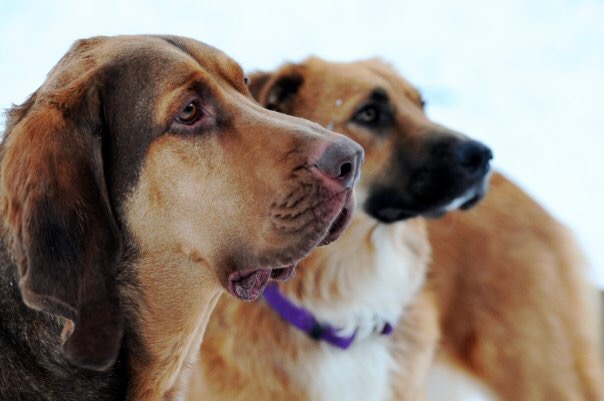 Hurry up there! Child lock the pantries, put the grape tomatoes on the windowsill, weigh down the garbage can lids, hide the food… Finn is moving in!

Yesterday we lost our old bloodhound, Finn. He passed away peacefully at home with Lisa, Olive and Lou by his side. He had a birthday coming up on Valentines day, and losing him was pretty hard. This has actually been quite a bit more difficult than I ever imagined it would be, especially considering what a (fill in the blank) he could be from time to much of the time. He did keep things pretty interesting though… there’s no disputing that!

I can still remember the day we rescued Finn from the subpar accommodations of his birth home, and moved him into our Jefferson Park apartment in Chicago. WE saw it as a rescue, but in hindsight, Finn likely saw it as a “dognapping.” In either event, we think we gave him a pretty good life. If he felt that way too, he had a funny way of showing it to us. It was a cold, and dark evening in the unincorporated town of Somewhereoranother, Indiana, where Lisa was able to instantly pick Finn out from the bunch. He reluctantly agreed to come home with us, and the rest is his story. Literally. It has always been about him. Sometimes I can’t help but wonder what the last fourteen years would have been like had Lisa chosen a different dog that night. To say things would have been less eventful would be to disgrace his life’s work with an incredible understatement…

Highland Park Police Dispatcher: “immediate dispatch requested on Sheridan road for an attempted robbery in effect. The homeowner indicated that the perpetrator may still be in the house, so proceed with extreme caution…oh and … wait this can’t be right… (audible laughter) they apparently tried to take … their microwave, which has been ripped from the outlet under the counter?”

Yes, in return for Finn’s aforementioned rescue he gave us fourteen years worth of great stories and gentle kisses, but he also gave us fourteen years filled with complete insanity. Food pulled from countertops, garbage cans ripped through, delivery people barked and charged at, walls stained with slobber, furniture ruined by slobber, us covered in slobber, and carpets stained with everything including slobber. Fourteen years of Halloween costumes stood paralyzed in, collars slipped out from within, chases down County O Road, chases down Sheridan Road, chases down Hi Mount Blvd, and always down the muddiest, wettest, thorniest path. Fourteen years of him chasing after deer, deer chasing after him, Finn swimming after ducks, ducks swimming after Finn, him chasing everything he sees, him stuck in leashes and tangled in trees, skunks dodged, dogs howled at, gardens destroyed and police deployed (it’s true by the way… he actually made us think we were being robbed after he ripped the microwave from the center island shelf, and dragged it to the front door in an attempt at getting the food that was locked inside. He couldn’t push the button to unlatch the microwave door, so he literally tried to destroy it to get in. Naturally we called the police… I mean what robber wouldn’t go for the microwave oven first?). Anyway, he left us fourteen years of mess after mess, and complaint after complaint. Not us complaining by the way… HIS complaining. Finn was the ultimate complainer, and he could actually articulate these complaints. If anyone ever heard Finn “talk,” they likely knew this antic of his all too well, and that between his unusually expressive eyebrows, and the clear tone of urgent displeasure in his voice, Finn was just about as dog as a human could be. All that said, he was actually a very sweet bloodhound, and we wouldn’t have changed any of that other stuff at the expense of messing up the overall recipe that was Finn. 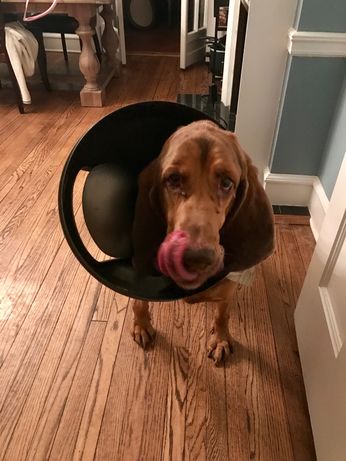 Lisa recently took this picture (left), and I think it serves as a great tribute to Finn because it beautifully represents his primary mission in life, which was to dump out and trudge through any garbage can not bolted to the ground and/or welded shut. Clearly he got the top off of this one. In the end he was debilitated by arthritis, presumably cancer, and all the other ailments designed to slow dogs down toward the end, but amazing as this sounds, he was climbing on counters and digging through trash bins until the very end. For a while we entertained the possibility that he was playing us with the “old dog routine” (hobbling up and down steps, struggling to get out of his dog bed, slow moving from here to there) because somehow he could still grab a single M&M from the back of the tallest kitchen counter with razor sharp precision… in complete darkness. After fourteen years he was like a scavenger ninja. These are the mysteries of dogkind I suppose.

Cliff Lissner is the
co-owner and director of
Chippewa Ranch Camp
www.ChippewaRanchCamp.com