Thanks for reading my first Cliff Notes blog of 2014! I will try to churn these out as often as possible, but I admit in advance to getting lost in the details of running camp (as you will read below), so please be patient with me.

For perspective, I will start this particular post by pointing out that each summer brings a new batch of girls that arrive with an inherent and understandable dependency on others. The younger the camper, the more needy for support and steady direction. One of the most rewarding experiences for me as a camp director is seeing these girls develop and grow in this capacity. 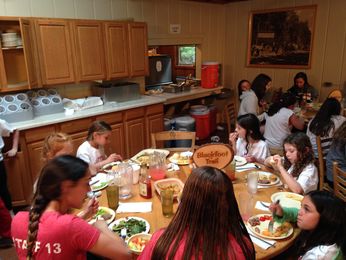 The other morning I sat at the 2nd grade table during breakfast (Blackfoot). There are seven campers in that group and man, they are adorable! We talked about odds and ends like where they were from, what they were excited for this summer, etc. The first thing to strike me, however, was their attention span: about four seconds. Am I boring? Yes. But that wasn’t really it (this time). This distraction came from their total fascination with their new camp life, and the seemingly endless motion of breakfast busyness happening all around us. They were completely captivated by their surroundings – people grabbing food trays from the counter, camper commissaries scraping off dirty plates and dropping off used dishes, and counselors moving about every which way trying to maintain their thoughtful and delicately balanced meal time rituals. The girls at my table were literally just staring at this crowd of people coming and going through the lodge, an endless ebb and flow of neon shirts and baggy sweatpants. I tried to imagine what they were actually thinking about during this observation, but I skipped right to asking the little peanut sitting next to me as to what was on her mind. I asked, “Right now, in this exact moment, what are you thinking about?” The camper in question turned and looked at me with that nervous expression that says why are you asking me this question and not someone else… ANYONE else? What actually came out of her mouth though was a simple “nothing,” I laughed and told her that she must have been thinking about something! From there I explained the dining hall process a little, and talked about how everyone in a community like Chippewa has to do their part as an individual for the betterment of the group as a whole, and that this very need explains the busyness during breakfast (at this point she was already off having another conversation with the girl sitting next to her). So seeing that she was not really digging the idea of a philosophical discussion on the complex moment in time when independence merges with community participation and social connection, I got up and dumped out my coffee (which had someone’s blueberry in it).

See, I know she was thinking about something. “Nothing” is code for “everything” sometimes. Personally, I think she was thinking about her cabin and her new friends sitting around the table with her. She was thinking about the activities that she was signed up for and whether or not she brought the right shoes. Then she was focusing on and analyzing the way that we separate forks, spoons and knives into buckets during cleanup. She was weighing out, calculating, pondering, estimating, analyzing, measuring, dreaming, worrying and hoping. She was wondering about the first time that she would be in charge of wiping down the tables, and if she would even know where to go to get the rags. She was deciding if she would try to carry all of the plates and cups to the dish window at once, or if it would make more sense to make multiple trips. She was thinking about Andrey (the nice Columbian staff member who was processing the dirty dishes). How will I approach him? Do I say something to him or just put the stuff down? What is expected of me? What if I trip and drop everything? What if I am embarrassed? And I bet that was the moment in thought when she looked over at one of her counselors to confirm that she was safe. Then, with that confirmation, I bet she smiled… 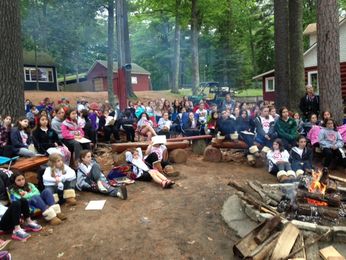 Sitting there I had an epiphany. I realized that each and every solitary sliver in time at camp is jam packed with developmental and even life changing opportunities. Perhaps more than I ever even realized. I wonder if much of youth development comes from within the mind of the child during moments like these, so we never even see the pieces coming together! Get beneath the surface and there is so much there. For example, in that particular moment I was (likely) witnessing the early forming stages of independence by way of problem solving, all happening in an environment that demands individual participation for the benefit of the group as a whole. To her it was nothing, but one person’s nothing is another person’s magical moment of discovery.

Am I that far off here? I don’t think so. This complex place that is camp easily lends itself to these subtle but magical moments of discovery. Some of you might be thinking nah, she was just daydreaming, and some of you might be buying into the magic, but in either case, I bet you smiled…